I was feeling down today, and then I started asking myself why. We won. We didn’t have a “red wave” as we had hoped, but that’s thanks in part to how polarized politically and culturally we are. Anyway, I saw a few things online that I thought might cheer you up and put things into perspective. I like what podcaster Tim Pool said. “it was a bad night for democrats it was a bad night for republicans because they wanted a bloodbath but only got a win”

it was a bad night for democrats

it was a bad night for republicans because they wanted a bloodbath but only got a win https://t.co/HqxTDDREbO

Tim Pool also had this to say, which I thought made a lot of sense: “ts funny how republicans won, DeSantis, Abbott, and Kemp won handily, 224 house seats projected, and yet I see leftists mocking the GOP as if they lost and conservatives lamenting the results the forecast was so bad for Dems that Gop winning this well is considered a loss”

its funny how republicans won, DeSantis, Abbott, and Kemp won handily, 224 house seats projected, and yet I see leftists mocking the GOP as if they lost and conservatives lamenting the results

Also, there are about 800k ballots still out in Arizona… so that brings me to the site Citizen Free Press. I was anxiously waiting to see how they felt about last night, and I didn’t get any doom or gloom from them, but what I did see was some common sense, clarity, and hope, so I thought I’d share it with you:

“Pennsylvania is the only surprise so far, though Mastriano was always a longshot, and OZ was not a candidate who inspired independent voters, which you need to win the Keystone state.

However, Nevada will soon have a new republican governor and Senator.

Blake Masters is the wildcard.

We need his victory to take pressure off the Georgia runoff.”

It’s true. We’re so sad there wasn’t this massive blowout, that we’re losing sight that we did WIN and we could still win more.

I know this sucks in many ways, we want so badly to wake up Americans so they see the light. But I think we need to accept that the days of “waves” are long gone. The last wave we saw was when Obama was in office. And that never happened again, and I don’t think it’s a coincidence. I think everybody has dug into their side, and they’re not budging, and we just don’t have a lot of those “swing voters” left.

Blue states want to say blue, have high crime and abortions and be miserable. It sucks for those of us who are conservative and live in these blue states, but not all of us can upend our lives over politics.

Anyway, this isn’t meant to give you false hope, but I think it’s important to look at what we got, where this country is at, and remember that traitors like Ronna McDaniel, Mitch McConnell, and Kevin McCarthy had a huge hand in many of Trump’s candidates losing. They pulled money from their campaigns and probably did a lot of sabotage behind the scenes.

And also, the mail-in ballot harvesting scheme, I am sure that has played its role, too… and in other cases, Dems just love to live in their own misery, like in PA. God only knows what’s going on in that state, for crying out loud.

Keep the faith, okay? This isn’t over yet. 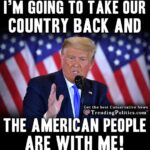