Many people out there still think it’s an unsolved question, whether or not Twitter was biased against conservatives. I mean, that’s like asking someone if water is wet, right? But the left is still working overtime, trying to prove that they were not biased at all and that Twitter was just one big, “fair and impartial” playground for all Americans. Meanwhile, we can all see with our own eyes what is happening, but we’re told not to believe our own eyes… just believe what the “experts” tell us to believe.

This seems to be a common theme in the “Biden regime era.”

So, keeping that in mind, a new report, conducted by the “brainiacs” at places like MIT and Yale conducted this study on Twitter’s political bias, and you won’t be shocked to discover that they didn’t find any bias from Twitter, but they did find that right-wing accounts shared the MOST “fake news.”

[…] this new study, done by four researchers from a variety of different universities (mainly MIT and Yale): Qi Yang, Mohsen Mosleh, Tauhid Zaman and David Rand. Now, it’s important to note that this study specifically looked at political speech (the area that people are most concerned about, even though the reality is that this is a tiny fraction of what most content moderation efforts deal with), and it did find that a noticeably larger number of Republicans had their accounts banned than Democrats in their study (with a decently large sample size). However, that did not mean that it showed bias. Indeed, the study is quite clever, in that it corrected for generally agreed upon false information sharers — and the conclusion is that Twitter’s content moderation is biased against agreed-upon misinformation rather than political bias. It’s just that Republicans were shown to be much, much, much more willing to share such misinformation.

Social media companies are often accused of anti-conservative bias, particularly in terms of which users they suspend. Here, we evaluate this possibility empirically. We begin with a survey of 4,900 Americans, which showed strong bi-partisan support for social media companies taking actions against online misinformation. We then investigated potential political bias in suspension patterns and identified a set of 9,000 politically engaged Twitter users, half Democratic and half Republican, in October 2020, and followed them through the six months after the U.S. 2020 election.

During that period, while only 7.7% of the Democratic users were suspended, 35.6% of the Republican users were suspended. The Republican users, however, shared substantially more news from misinformation sites –as judged by either fact-checkers or politically balanced crowds –than the Democratic users. Critically, we found that users’ misinformation sharing was as predictive of suspension as was their political orientation. Thus, the observation that Republicans were more likely to be suspended than Democrats provides no support for the claim that Twitter showed political bias in its suspension practices. Instead, the observed asymmetry could be explained entirely by the tendency of Republicans to share more misinformation. While support for action against misinformation is bipartisan, the sharing of misinformation –at least at this historical moment –is heavily asymmetric across parties. As a result, our study shows that it is inappropriate to make inferences about political bias from asymmetries in suspension rates.

Look at how the media dismissed claims that the right. was censored on Twitter. This is from The Hill:

One of the reasons Tesla tycoon Elon Musk says he wants to take over Twitter is that the social media platform censors conservatives.

“I’m worried about de facto bias in ‘the Twitter algorithm’ having a major effect on public discourse,” he tweeted not long before launching his hostile $43 billion bid for the company.

Leading conservatives, who for years have accused Twitter and other social media platforms like Facebook and YouTube of censoring right-leaning views, have applauded Musk’s bid. “Let’s hope this goes through and we have free speech on Twitter again,” Rep. Jim Jordan (R-Ohio) said in a Fox Business interview that he posted on Twitter.

Accepted as gospel on the right, the notion that conservatives are marginalized or “canceled” by social media companies has always had an odd ring, given that conservative pundits and politicians (like Jordan) are notably prolific and enjoy high levels of engagement on the major platforms. Last year, the NYU Stern Center for Business and Human Rights published a paper I wrote that observed the absence of any trustworthy studies finding that platforms were removing conservative content for ideological reasons.

Doesn’t that sound familiar? This is what the media and the left say about everything under the sun. It’s all a “conspiracy theory.” Nothing we complain about is “real.” This is how lazy our so-0caled “reporters” are these days. They just regurgitate left-wing talking points and quote the so-called “experts.” It’s a pattern they all follow whenever anything is said that they disagree with.
They pretty much laugh everything off, like the rambling of some crazy Q-kooks, and then start talking again about how Vlad stole the 2016 election, how 2020 was the fairest election in the entire world, etc., and so forth.
Meanwhile, Elon, who is actually inside Twitter now, and can see what’s really going on, is singing a totally different tune. He says he’s uncovered some dark stuff, and that the world should know the truth.
Here’s what Elon said in a tweet: “The more I learn, the worse it gets. The world should know the truth of what has been happening at Twitter. Transparency will earn the trust of the people.”
And vox populi, vox dei, is Latin for: “the voice of the people is the voice of God,” something Elon said when he allowed Trump back on the site.
Yes, the world should know the truth, but will the media, whose job it is to cover for the regime, even acknowledge it, or will they spin their own “narrative?”
I think we all know the answer to that question. 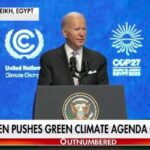