This may be a hard pill for some of you to swallow, but it’s the truth: GOP establishment, NeverTrumper’s and former CruzCrew (who are now DeSantis 2024) have teamed up to take down Trump and destroy MAGA. The former Cruz Crew types never liked Trump’s personality and felt it was embarrassing to support his behavior. So, they believe the much more “measured” DeSantis, not Trump, is the future of the GOP. This is an incredibly selfish take, since DeSantis is only 44 years old and has an entire future to learn the “America First” ways and then run. Meanwhile, the GOP establishment has been trying like hell to get their foot back in the door, and they see DeSantis as a way to do just that. And of course, the NeverTrumpers have the mentality of “anybody but Trump” and will jump on whatever bandwagon they can to make that happen.

That’s what you see unfolding right now, and it’s going to get worse.

What’s happening behind the scenes according to slews of “DC insiders” is that several establishment/globalist GOP mega-donors have been pushing DeSantis hard to run against President Trump. Steve Bannon revealed who they are, and one of the men is none other than notorious globalist and closet liberal, Paul Singer.

Here’s a little 2017 snippet from Breitbart on globalist Paul Singer:

”Paul Singer, through the Washington Free Beacon news outlet, appears to be the Republican behind what eventually became Fusion GPS’s now-infamous dossier on President Donald Trump. It was hardly the first time the Wall Street billionaire bankrolled anti-populist causes. Here are five of Singer’s worst globalist endeavors.
1. Amnesty
Singer has a long history of supporting amnesty for illegals and mass third-world immigration. Not only was he a key backer of the Republican establishment senators sponsoring the 2013 “Gang of Eight” amnesty bill, he joined with George Soros and the Ford Foundation to fund the National Immigration Forum open-borders non-profit. That group even tried to create a sham evangelical Christian front to push amnesty.
2. Same-Sex Marriage
Homosexual marriage went from a radical idea in all but the most leftist of circles to the nationwide law of the land in the space of 15 years. Few Republicans can claim as much responsibility for this social change as pro-gay marriage billionaire Paul Singer. He, for example, personally intervened to pressure the New York State legislature to approve the new definition of marriage.
His links to the leftist agenda, however, did not end with same-sex marriage. The so-called Human Rights Campaign, to which Singer continues to cut checks, led boycotts of the entire state of North Carolina when the elected representatives of that state saw fit to pass a law maintaining the separation of bathrooms on sex.”

I’m sure McConnell, McCarthy, and McDaniel were in on this too, and that’s why they sabotaged midterms.

Ron DeSantis is being pressured to run against Trump in 2024 by Deep State campaign donors according to Steve Bannon interview with @SebGorka pic.twitter.com/ELj9JF3F8v

And while all of this is unfolding, President Trump is in the wings waiting to announce his 2024 run, and his daughter-in-law Lara Trump, the lovely wife of Eric, has come out with a very kind, olive-branch message to Ron DeSantis.

The New York Post, which has turned on President Trump with a TDS vengeance, reported on the story this way:

Lara Trump has begged “very smart” Florida Gov. Ron DeSantis to delay his expected White House run to give her father-in-law, former President Donald Trump, a clear shot at the Republican nomination in 2024.

Eric Trump’s wife, now a Fox News contributor, said it would be “nicer” for DeSantis to wait until 2028 while seemingly conceding that, as The Post declared on its Nov. 9 front page, the Florida governor is “DeFuture” of the GOP.

“Look, he’s a young guy. There will be a lot of opportunity for him in the future … to run for president,” she added of the 44-year-old governor, who was re-elected in a landside to a second four-year term as the Sunshine State’s leader.

“And I think he’s a smart enough guy to know that it would be great to have all the support of this party, of the America First, MAGA movement — whatever you want to call it — fully behind him in 2028 than possibly has, you know, fracturing it in 2024,” Lara Trump continued.

As well as giving the 76-year-old Donald Trump an easier run, it would prevent the former president from having to resort to his usual vicious tactics, she suggested.

“I can tell you those primaries get very messy and very raw. We’ve experienced that before,” Lara Trump said, days after her father-in-law publicly lost his cool at his likely challenger.

Lara Trump also suggested that without DeSantis in the contest, her father-in-law would likely have an easy run to the nomination, laughing off suggestions that he was losing support from Republicans blaming him for disastrous results in the midterms.

She insisted it was no different from party bigwigs initially opposing Trump in 2016 before rallying behind him once it became clear he would be the nominee.

“They know that he has what it takes not only to win the White House, but to do incredible things for this country,” she said.

“So yes, absolutely, I think the party would be behind him and I think that they know that the American people, by and large, are behind him,” she suggested.

While giving her predictions, Lara Trump also teased her father-in-law’s expected announcement at an event in Mar-a-Lago on Tuesday that he is running in 2024.

Lara was very nice and classy about it, and I would honestly, expect nothing less from her. It’s obvious that DeSantis should wait, and it’s absurd that he’s even entertaining this idea, which would likely divide the Republican Party, even more, crush MAGA, and allow the establishment back in the door. 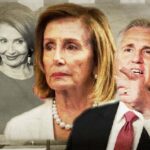