Experts are warning Dems to steer clear of Biden. He’s the campaign kiss of death. Joe is unpopular in swing states, yet, his narcissism and gigantic ego keep pushing him to be involved in midterms. This man is so out of it, that he actually thinks that he’s an inspirational speaker who can “turn things around” for his team. Joe is suffering from delusions of grandeur. But this is very common in people with dementia, they have absolutely no clue how bad off they are, cognitively speaking. In Biden’s mind, it’s still 1992, and he’s a fast-talking, wheeling, and dealing politician who can talk his way in or out of anything.

The reality is not even close to that scenario. In the year 2022, Joe Biden looks and sounds like a man who should be in a nursing home with doors that lock from the outside, so he can’t wander around and hurt himself. He can hardly speak, and when he does manage to dribble something out, it’s usually untrue or totally wrong and the White House has to swoop in and correct him. And don’t get me started on him wandering around and trying to find his way off a 2-foot stage.

Joe is not inspirational or motivating, he’s a shuffling disaster.

We all know this, but Joe doesn’t, so he keeps trying to insert himself into the Midterms, and everyone is like, “Thanks, but no thanks, Jack!”

But Joe keeps showing up.

As a matter of fact, now he and his ding-a-ling VP are heading to PA to help Fetterman, who just had the worst debate in the history of politics.

But Joe’s polling in PA is bad, yet a couple of weeks ago, he shuffled into a blue-collar town and pushed his abortion crap — an issue that most hardworking middle-class guys are not thinking about every day, for crying out loud.

These people just want to afford groceries and pay their outrageous heating bills, thanks to Biden’s horrific inflation.

Express UK reported that Joe Biden’s interventions in key swing states in the midterm elections are providing a major boost for his Republican opponents, a Washington DC insider has warned. Patrick Basham, director of the Democracy Institute, made his comments as polling suggests the Republicans are set to make big gains despite visits by Biden to states like Pennsylvania this week.

This would give the Republicans 53 seats in the Senate to the Democrats’ 47, the same prediction in the monthly tracker poll for Express.co.uk by the Democracy Institute polling.

Mr Basham said: “Joe Biden campaigning in-person for Democratic candidates is the gift that keeps on giving – for their Republican opponents.

“For several months, Democrats in swing states and competitive congressional districts have avoided their own president like the plague. And, for a very good reason. Biden’s not only unpopular nationally with voters, but he’s especially unpopular in battlegrounds like Pennsylvania, Michigan, Ohio, Arizona and Georgia.

“When it comes to the President’s endorsement, it’s a case of, ‘Thanks, Mr President, but actually, No thanks!’. Dozens of embattled Democratic politicians continue to bat away White House invitations to appear alongside Biden. The less fortunate candidates are barely tolerating their face-to-face experiences with a general leading his partisan troops to a heavy midterms defeat.”

Polling shows some of Biden’s key campaign issues, such as abortion rights for women, are weak for him in key swing states in the so-called Rust Belt.

Republicans have a plus two percent advantage with their opposition to abortion, according to the Democracy Institute.

Adding to that, the Democrats are associated with wealthy elites by 47 percent and ordinary people by just 43 percent.

Mr Biden himself has a disapproval rating of 55 percent. Respondents to the poll indicate Trump was a better President as inflation and the cost of living crisis bite Americans.

“Biden’s physical and geographic proximity to Democratic candidates guarantees these voters will decide in favour of the Republicans.”

Well, let’s hope Biden’s narcissism keeps up, and he continues forcing himself on candidates because the more he talks the better we do! 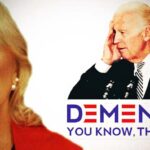